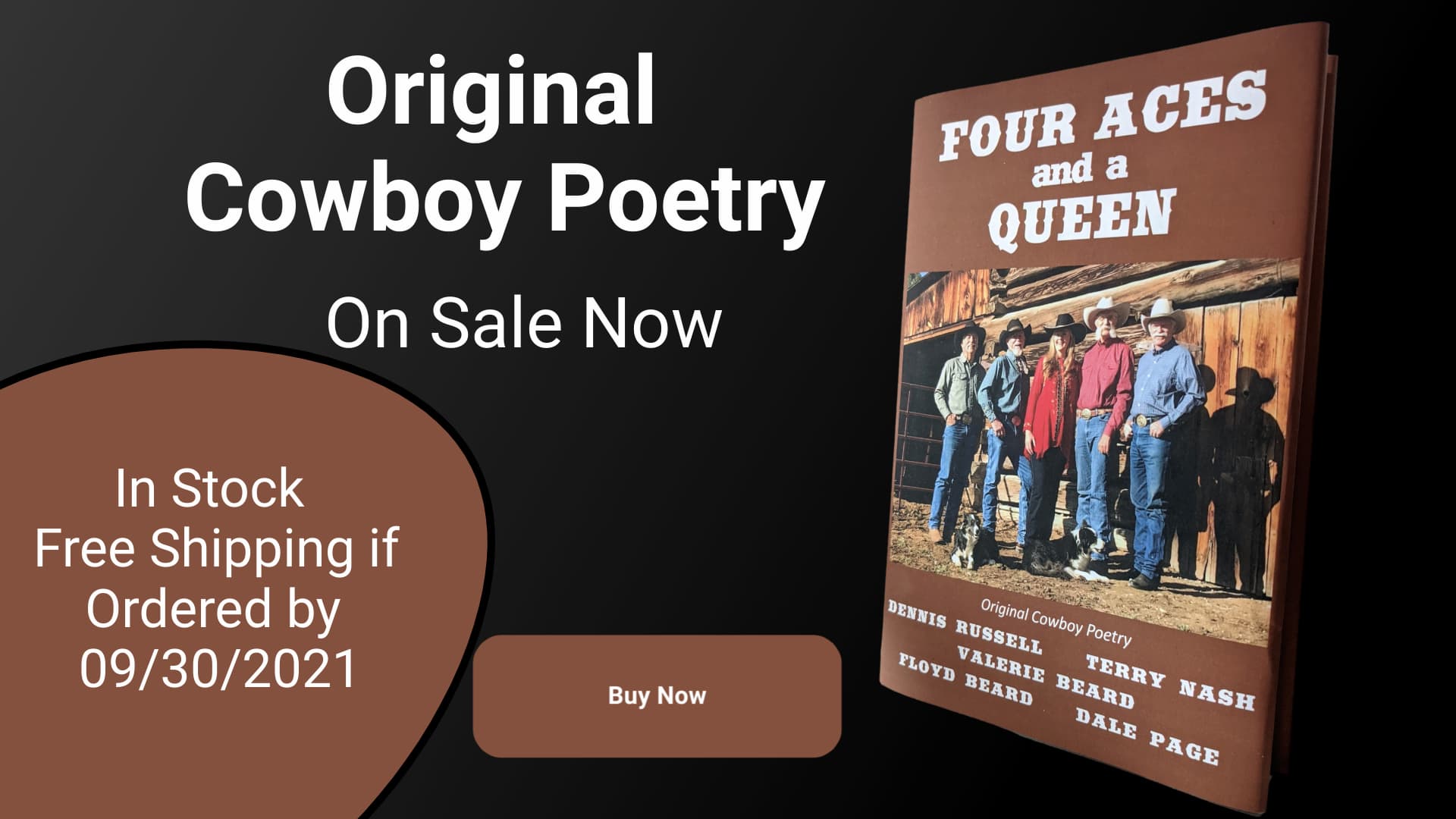 Terry Nash has been a top five finalist for the last four years for the Western Music Association Male Cowboy Poet of the Year award. He was raised on a farm/ranch cow/calf operation on the High Plains of Colorado, near Idalia. In the late eighties, Terry drifted to a small ranch near Loma, Colorado, where he and his wife Kathy raise horses, hay and beef, and spend as much time on the mountain horseback as possible. Along with writing and reciting his original cowboy poems, Terry brings classic cowboy poetry to stages throughout the West, and has recently co-written a couple songs. Note: Don’t ask him to sing!

Purchase the Four Aces and a Queen Book

We’re proud to announce, (but not surprised) that he WON both!

If you see Terry make sure you ask to hold them, he doesn’t mind cleaning the fingerprints off, which we hear he does several times a day :O), we expect him to name them soon. 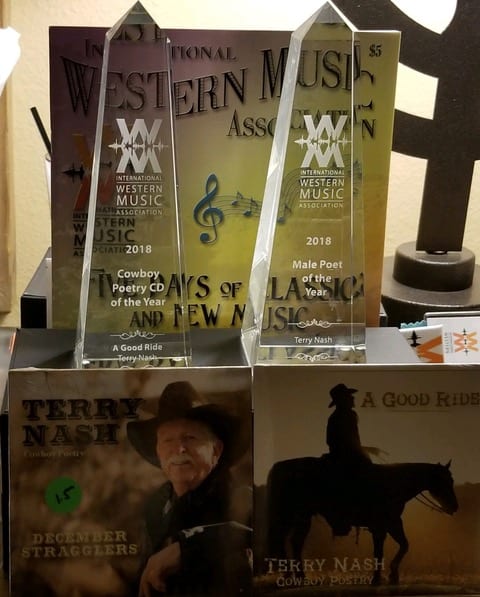 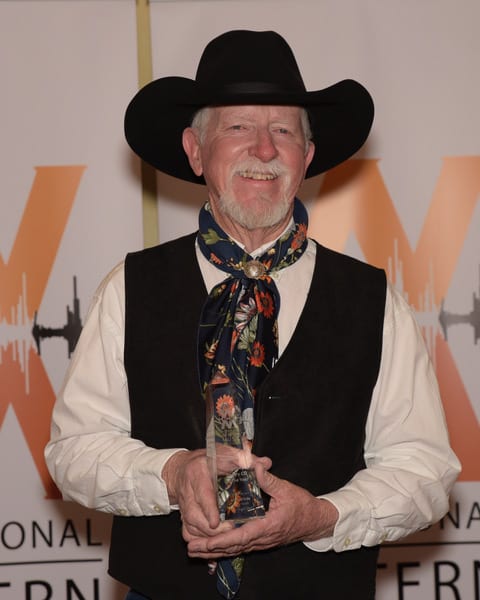 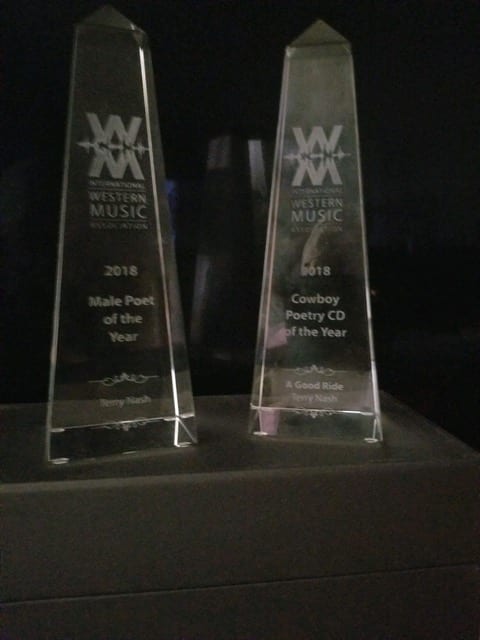 On Monday, January 28, 2019, Terry Nash was honored at the Commissioners’ Administrative Public Hearing for being an outstanding Road and Bridge Department employee as well as a decorated Cowboy Poet. During his 14 years of service to the citizens of Mesa County, Terry Nash demonstrated extraordinary commitment, and dedication beginning as a temporary employee and retiring as an equipment operator for the Appleton District. As an artist, Terry Nash was named 2018 Male Poet of the Year by the International Western Music Association (IWMA). Nash’s CD “A Good Ride” was also named Cowboy Poetry CD of the Year. Awards were held November 10 at the International Western Music Association’s 2018 Awards of Excellence in Albuquerque, New Mexico. Congratulations, Terry!… 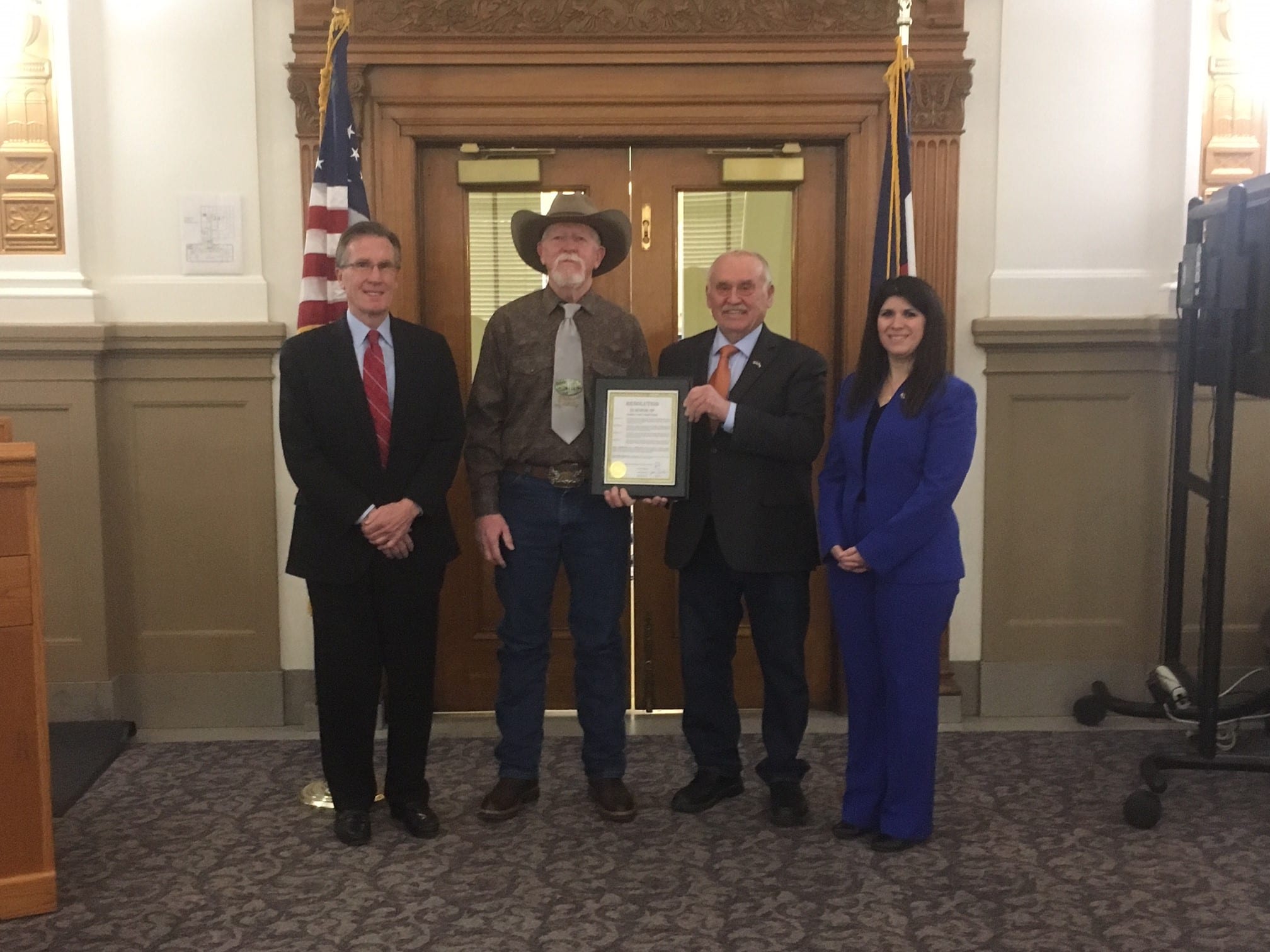 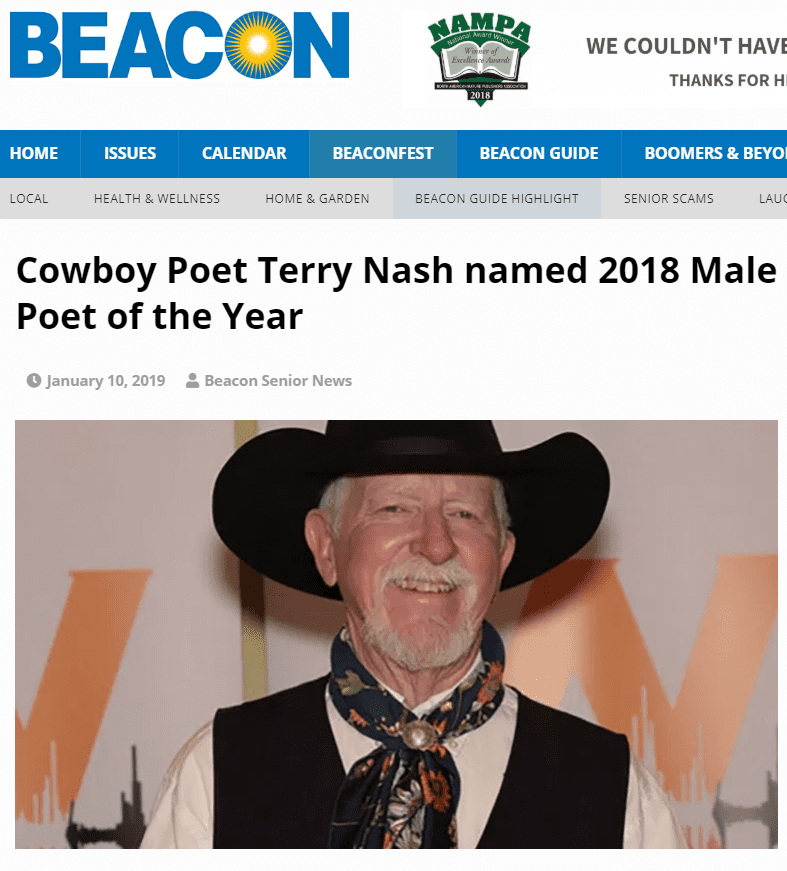 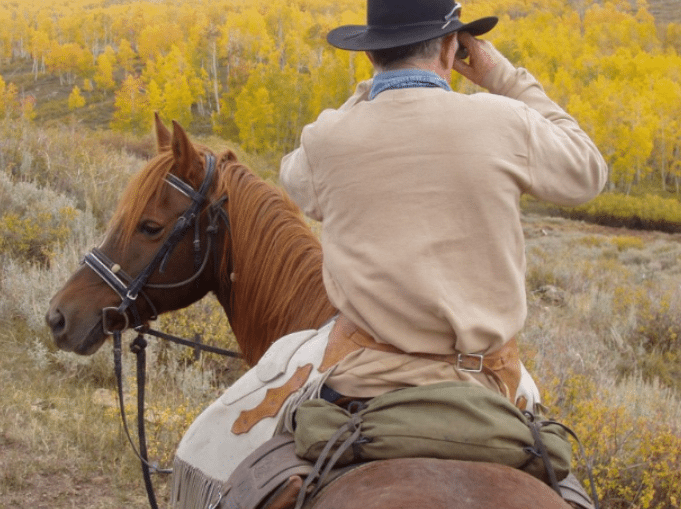 What People Are Saying…

Click on the right or left arrows to scroll through.

Male Poet of the Year

The Museums of Western Colorado is proud to announce that Western Slope Cowboy Poet Terry Nash has been named 2018 Male Poet of the Year by the International Western Music Association (IWMA). Nash’s CD “A Good Ride” was also named Cowboy Poetry CD of the Year. Awards were held November 10 at the International Western Music Association’s 2018 Awards of Excellence in Albuquerque, New Mexico.
Nash is also instrumental in rejuvenating the cowboy gathering tradition in Grand Junction. He, along with other poets, created the Western Slope Cowboy Gathering which is held the first weekend of November annually at the Museum of the West.

Congratulations to Terry Nash, our very own Cowboy Poet and co-leader of the Western Slope Cowboy Gathering, for receiving a proclamation from Mesa County Commissioners declaring this day (January 28th, 2019) Terry Nash Day.

Besides being a great guy, he is being recognized in part for winning the Western Music Associations 2018 Male Poet of the Year and 2018 Poetry CD of the Year last November .

Colorado Has A New ‘Poet Lariat’

Terry recently had the privilage of speaking on Colorado Public Radio! Here’s what they had to say:

When Terry Nash isn’t working as a cattle rancher on a small ranch in Loma, he’s a poet. A cowboy poet.

The genre of poetry dates back to the late 1800s and grew out of the cowboy storytelling tradition. Nash paints gritty but loving pictures of ranching life in his poems. He often pulls straight from his life of ranching and farming across Colorado’s eastern plains and Western Slope.

The Western Music Association recently honored both Nash as the Male Poet of the Year and his latest CD, “A Good Ride,” as the Cowboy Poetry CD of the Year. Nash talked to Colorado Matters about his work, and the tradition of cowboy poetry.

Terry Nash’s new album is what I feel cowboy poetry should be all about. Here you get well-crafted mountings of good stories with genuine, believable delivery. Add a nice ratio of originals to classics from Kiskaddon, Knibbs, Barker, Sweeten, McWhorter and Clark.  There!  You’ve just created a winner. The collection features very intelligently applied original guitar music from Ken Dravis, but music alone won’t save the day.  Ultimately it comes down to words.  From Nash’s “Cowman’s Lot” try this picture of a cowboy watching a newborn calf’s first nursing in winter’s chill:  “The man smiled to hear the smack of wet lips…‘knew the calf was getting his meal…inner warmth would then spread from nose to hips, and Mom’s rough tongue would seal the deal. In all respects Terry Nash’s December Stragglers is a superior offering in the genre. Thirteen tracks.

“Raised on a cow-calf operation on the High Plains of Colorado, Terry Nash captures one such wintry birthing scene in “Cowman’s Lot” from his recently-released album, December Stragglers. His description of waiting for a heifer to calve is spot-on, right down to the baby “nose-diving’ into the ground.” It’s apparent from this original poem and the title track (read “December Stragglers” that Nash writes from experiences. Most ranch folks will be able to put a face to the “hunter a-hoofin’ it into town” and the cow he calls “Wild old Snort.”  Nash includes several pieces by others on the 13-track album, including classics by Henry Knibbs, Bruce Kiskaddon, Badger Clark, and S. Omar Barker. It was a pleasant surprise to find Larry McWhorter’s sentimental contemporary “Black Draught” among them”.

“Terry Nash has the distinct ability to put words together and deliver them in a captivating way. He’s performed at just about every cowboy poetry gathering in the southern Rockies. Terry was nominated for Cowboy Poet of the Year by the Western Music Association and was selected to perform at Elko, Nevada, at the biggest cowboy poetry gathering in the country. A cattle raiser from the Grand Junction, CO, area, Terry knows what he’s talking about. He lives the Western life he writes about, and he’s a master at showing it to you.”

“First, Terry Nash is, beyond a doubt, one of the best Cowboy Poets writing or delivering today.  I have always found his releases to be worth both your time and investment.

Badger Clark’s “Ridin’” was put to music as a song some years back. For this album, guitarist Ken Dravis helps to create a different but equally suitable mounting for Nash’s enthusiastic take on it.  Beyond the Clark cover, others include works of Kiskaddon (“The Lost Flannins”), Donnie Wynkoop (the hilarious “Fords [Snake Attack]”) and Buck Ramsey (“Bad Job”).  Original picks are “Homesteader,” a fresh version of his wonderful work “A Cowman’s Lot,” an ‘object’ lesson (the object being cow poop) called “Blurred Vision,” “December Stragglers” and what could be called a modern-day “moral of the story” story “Skype (#don’tgetthispoundsignstuff).”

I’ve said this in other reviews, but it holds true.  This particular CD is one of those you might consider using when defining or illustrating what cowboy poetry is or should be. Fourteen tracks.  Highly recommended.”